Free forum for everything around the classic server not falling under other categories.
Post Reply
16 posts • Page 1 of 1

Hey everyone. So after the builder guide, I was urged to make another one for veterans since you don't generally go to school to figure your rank out. I hope this guide not only helps any new vet get a grip on what to do, but also clears things up for vets who are confused on how to do what they do. So with that in mind, let's begin:

1.) The purpose of the rank. As a veteran, you have a curious luxury; you aren't required to do anything beyond following the rules. Sure, if the server is running at max capacity, we might ask you to step in and patrol, but outside of that, you have no requirements expected of you. Veteran is a good rank to figure out what you enjoy doing the most. Take that time for what it is and enjoy it!

2.) The basics of moderation. Now that you have veteran, you have new commands that allow you to help patrol and moderate the server. If you choose to moderate, there are a few things you need to constantly keep in mind: First off, if you are patrolling someone and an op+ steps in, they will handle the situation. The op+ are the staff of fCraft, so what they say goes. Second, use maturity with patrolling. A lot of times, a guest isn't familiar with classic servers, or even Minecraft to begin with. If they mess up, you don't need to call them idiots or do anything beyond that. Just let them know what they are doing is wrong, and move on. Third, and most importantly of all; use common sense. There is no set formula for patrolling, because there are so many different situations that could happen that a formula would be pointless. You have to rely on common sense when it comes to moderating, whether its how many times you need to warn someone before you kick, or whether or not someone needs a ban (it does not hurt to ask staff for an opinion, although as a rule of thumb if you don't know whether someone deserves a ban, don't ban at all).

3.) The updates for building. The other side of being a veteran is that you have plenty of time to build. There really isn't much of a difference between building as a builder and building as a veteran beyond a couple new tricks and a larger block limit. The basic rules are still the same (no draw commands on main, don't use commands to grief/spam/whatever, etc.). Another upside is you can build in veteran worlds, which is pretty much the same kind of luxury as builder worlds were, it just comes in a dark green color and usually with better builds.

4.) The future. From veteran rank, there is a split in rank directions. You have the Ops on one end, who specialize in moderating and operating the server (hence the name Op), and you have Masons on the other end, who specialize in building extremely awesome builds. However, just to be clear, just because you become a Mason doesn't mean you can't become an Op (or vice versa). They aren't paths, just ranks with a specialty. If you want to change specialties, then you are welcome to do so. In order to get Mason rank, you must submit an application on the forums with a few pictures of the builds you have made and would like to use for your application. The more builds you have, the better your chances. Op rank is NOT something that you gain after a certain amount of time. It is a rank that is awarded to those that the staff deem as trustworthy. Kick count/ban count/hours are not factors that make you stand out; the factors looked for the most are character and maturity. If you are the best patroller in the world and you are immature as hell, you will not get Op. Also, just a word of advice, asking for Op significantly decreases your chances of ever getting it. So does sucking up to staff who play a part in Op promotion (special request quote from another member of staff). If you genuinely care about helping out the server and making the game more enjoyable for other people, then you may become an Op one day.
If you have anything you would like to add to this, feel free.
Last edited by xN8Gx on December 10th, 2011, 7:38 am, edited 1 time in total.
[12:43] <FCB1> +Pemalite: N8G. You are the sexiest chick ever.
[12:44] <FCB1> +Pemalite: N8G. You so sexy. I wanna touch and stroke your luscious beautifull hair like it was my own and hear you purr.
Top

And another link to add to school, or to wherever.
Top

I just saw this:

Also get it into your heads that you guys are NOT staff. We, the ops, are.
Top

These guides should be post'd at School, it'll really help out the learning/clearing up confusion.

i can agree w/ darklight on that one. Vets are more like senior members, where op+ are more staff-like in that they manage the server as a whole. they are obligated to service to fcraft; if they can't fulfill that, they shouldn't be op+. exceptions are present in that once you reach trustee+, it's your senior knowledge and experience that's favored over participation.


PS: i think This might be a bit helpful

. thank astelyn for posting in on a thread somewhere.
Show

00:53 hafnium: cartoon you talk too much

markiled: i just want to hump the speakers
Top

Just so I don't take this info wrong mason is when you build something incredibly epic and op comes with maturity Willing to help and time on the server?
Pavoneo-there's a 3 pointed cube?
Nuclearwaffle121-pav yea it's called a triangle.
Top

Time on the server is not a factor.
Top

xN8Gx wrote: (Op) is a rank that is awarded to those that the staff deem as trustworthy. Kick count/ban count/hours are not factors that make you stand out; the factors looked for the most are character and maturity.

As far as mason is concerned, just make awesome builds. The more, the better. As for Op, the first two are factors. Time is not. The reason time isn't a factor is because hours are just a statistic. What you do in those hours is what counts. Besides, anybody can hour farm up to a certain time. Doesn't make them good vets.
[12:43] <FCB1> +Pemalite: N8G. You are the sexiest chick ever.
[12:44] <FCB1> +Pemalite: N8G. You so sexy. I wanna touch and stroke your luscious beautifull hair like it was my own and hear you purr.
Top

It is not something you do, it is something we think you are.
Ferrisbuler2: i will stay but i might not post cus of ollieboy
Top

Alright thanxs for clearing that up lol I was confused haha
Pavoneo-there's a 3 pointed cube?
Nuclearwaffle121-pav yea it's called a triangle.
Top 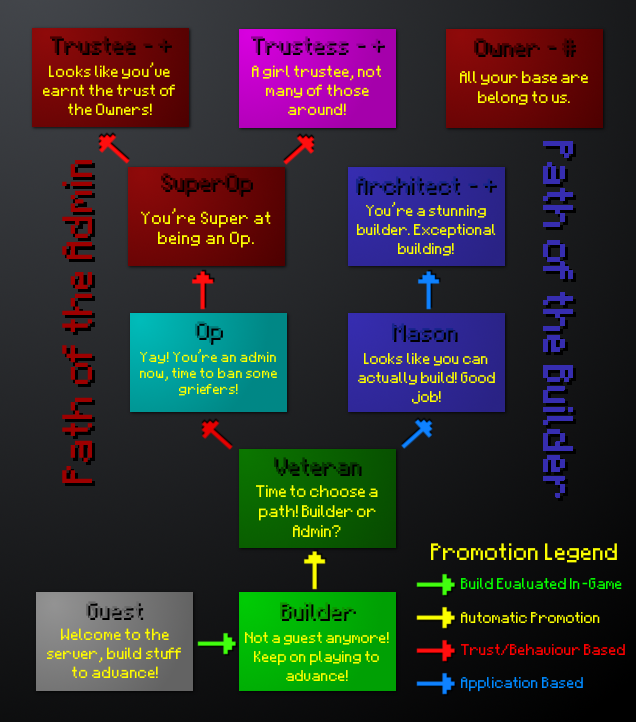 Revived
Aleries: What OS is your server running on?
FierceReacter: 5
Top

Eww it's that image again!

Ollieboy wrote:Revived with the reminder that you don't "choose" the "op path".

Not choosing the mason path is effectively choosing the op path though.
This post makes my post count increase by one!
Top

Not choosing mason is choosing to be a veteran
Ferrisbuler2: i will stay but i might not post cus of ollieboy
Top

I'm not a Canadian (forgive me of the stereotype (and there we go again, saying sorry) )

But please, I am a curious person.
If I revived this topic, that is, again, supposed to be dead and left here, sorry.

I saw it earlier, but yes, is it truly possible to choose the building path, then eventually be sucked into the moderating path?

Scenario: Hey, I'm an Architect, nothing to do-- Ermahgerd, Griefers, better stop them as no OPs are around

-as time flies by-


and you know , he eventually transfers to the other side, etc.

Is it possible?
The Game
Top